Originally from Singapore, Lynette has recently completed a Master of Arts in Music Production, before beginning her Ph.D in Audiovisual Composition under the supervision of Dr. Federico Reuben at the University of York (UK) in 2016. With a diverse music technology background, she is currently interested in exploring the integration of technology and musicians through the creation of audiovisual compositions – examining the relationships between digital and physical elements, as well as the visual and auditory.

Can you see a forest? Can you hear a moon?

A modular wall installation, consisted of 3 wooden panels and built-in mini speakers, broadcasting a score.
Referencing pareidolia, a psychological phenomenon that causes some people to see or hear a vague or random image or sound as something significant, the subject matter in the wooden sculptures is open to interpretation to each viewer. Some see mountains, others see faces, letters or kids toys. The sound score provides a possible rendition to depicted elements. Can you decipher human speech, a reverberating bridge, a forest, or maybe winds from a surface of Mars? The abstract tapestry of sounds lasts for 38 min
The project is akin to a Rorschach test, harmonizing myriads of perspectives and connotations, along with providing a unique platform for incorporating both physical senses and imagination in an observer. 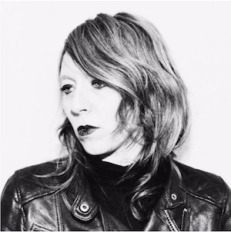 Born in Nantes, France in 1978 of a French mother and Greek father. She began piano lessons at eight years old and taught herself accordion at eighteen. While studying sociology at the Sorbonne she joined the folk group “L’Attirail”, playing piano and accordion. With the band, she began to explore the audio-visual world with T.V. film music and improvisation for silent movies, moving on to compose, on her own account, music for shorts and sound-scaping for exhibitions and installations. She has since scored music for film and ballet.